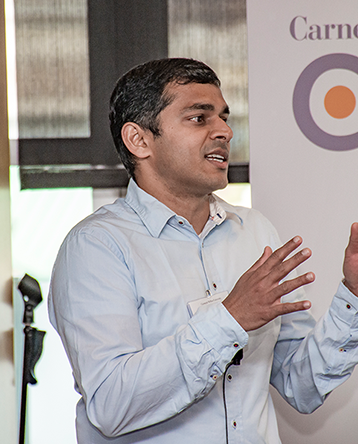 Vyas Sekar is a professor in the Department of Electrical and Engineering at Carnegie Mellon University, and is affiliated with the CyLab Security and Privacy Institute. His research is at the intersection of networking, security, and systems. Sekar's current research focuses on systems for accelerating the deployment of innovative network middleboxes, and designing content distribution mechanisms to improve user experience.

Sekar received his Ph.D. from the Computer Science Department at Carnegie Mellon University in 2010. He has been the recipient of multiple awards, including a National Science Foundation CAREER Award in 2016. He earned his bachelor's degree from the Indian Institute of Technology Madras, where he was awarded the President of India Gold Medal. His work has been recognized with best paper awards at ACM SIGCOMM, ACM CoNext, and ACM Multimedia. In addition to being a professor of electrical and computer engineering, Sekar is affiliated with the CyLab Security and Privacy Institute.

Vyas Sekar, Professor in CMU’s Electrical and Computer Engineering Department, was featured by Authority Magazine. In the article, he discusses how he became interested in cybersecurity, talks about his research, and offers thoughts on what must be done to protect critical industrial systems from cyber attacks.

Sekar quoted on how hackers search for vulnerabilities

Vyas Sekar, Professor in CMU's Electrical and Computer Engineering Department, provides insight on how hackers search for vulnerabilities, explains the importance of security protocols, and shares ways entities can protect themselves against cyberattacks.

An overview of papers, authored by members of CMU's CyLab Security and Privacy Institute, being presented at the 31st USENIX Security Symposium

ECE’s Vyas Sekar was quoted in Best Life on cybersecurity measures to protect your cell phone while out and about, particularly when using public charging stations. “It’s easy to modify the outlet if the attacker has physical access,” Sekar originally told the New York Times.

ECE’s Vyas Sekar and fellow researchers have earned ACM SIGCOMM’s Test of Time Paper Award, recognizing the lasting impact of their study, which remains a “vibrant and useful contribution” in today’s streaming landscape.

Researchers at CMU’s College of Engineering are working to develop computationally capable constellations of nanosatellites, equipped with machine learning techniques that extract valuable insights from the data while still in orbit.

Three research papers from CyLab on privacy and data protection were highlighted in an article by Technical.ly.

CyLab’s Lumos team was highlighted in The Hacker News for recent research.