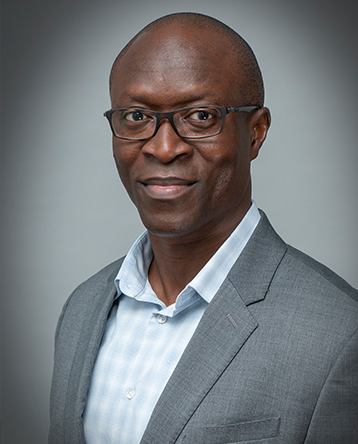 Conrad Tucker is an Arthur Hamerschlag Career Development Professor of Mechanical Engineering and holds courtesy faculty appointments in machine learning, robotics, and biomedical engineering at Carnegie Mellon University. His research focuses on the design and optimization of systems through the acquisition, integration, and mining of large scale, disparate data.

Tucker has served as PI/Co-PI on federally/non-federally funded grants from the National Science Foundation (NSF), the Air Force Office of Scientific Research (AFOSR), the Defense Advanced Research Projects Agency (DARPA), the Army Research Laboratory (ARL), the Office of Naval Research (ONR) via the NSF Center for eDesign, and the Bill and Melinda Gates Foundation (BMGF). In February 2016, he was invited by National Academy of Engineering (NAE) President Dr. Dan Mote, to serve as a member of the Advisory Committee for the NAE Frontiers of Engineering Education (FOEE) Symposium. He received his Ph.D., M.S. (industrial engineering), and MBA degrees from the University of Illinois at Urbana-Champaign, and his B.S. in mechanical engineering from Rose-Hulman Institute of Technology.

The Effect of Deepfake Technology on Education

Tucker to co-chair workshop on AI and justified confidence

MechE’s Conrad Tucker has been invited to serve as co-chair for “Artificial Intelligence and Justified Confidence: A Workshop” by the National Academies of Sciences, Engineering, and Medicine.

Conrad Tucker will serve on the U.S. Chamber of Commerce’s newly-launched Commission on Artificial Intelligence Competition, Inclusion, and Innovation.

MechE’s Conrad Tucker has joined the U.S. Chamber of Commerce’s Commission on Artificial Intelligence Competition, Inclusion, and Innovation to advance U.S. leadership in the use and regulation of AI technology.

A call to integrate AI and STEM education

Artificial intelligence (AI) has penetrated the job landscape and is of great interest to educators. As we develop methods for integrating AI and STEM education to transform the U.S. workforce, we also need to broaden the public’s awareness of what AI can do now.

MechE’s Burak Kara and Conrad Tucker have been recognized as Impact Scholars and awarded $10,000 as part of Google’s AI for Social Good program. Their proposal aims to use machine learning and artificial intelligence to improve screening for oral cancers.

A new study by Conrad Tucker shows that patterns in which information is shared online may indicate the information’s authenticity.

Carnegie Mellon University (CMU) CyLab and CMU-Africa have established the CyLab-Africa initiative, which aims to improve the cybersecurity of financial systems in Africa and other emerging economies.

Carnegie Mellon University's College of Engineering awarded professorships to Conrad Tucker and Jessica Zhang in recognition of their outstanding contributions.