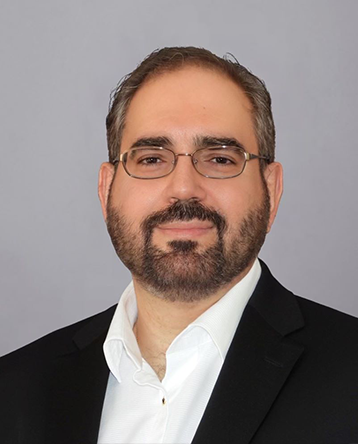 Professor Marios Savvides is the Bossa Nova Robotics Professor of Artificial Intelligence at Carnegie Mellon University and is also the founder and director of the Biometrics Center at Carnegie Mellon University and a full tenured professor in the Electrical and Computer Engineering Department. He received his Bachelor of Engineering in Microelectronics Systems Engineering from University of Manchester Institute of Science and Technology in 1997 in the United Kingdom, his Master of Science in Robotics from the Robotics Institute in 2000 and his Ph.D. from the Electrical and Computer Engineering department at CMU in 2004.

His research is focused on developing core AI and machine-learning algorithms that were successfully applied for robust face detection, face recognition, iris biometrics, and most recently, general object detection and scene understanding. He and his team were the first in the world to develop a long-range iris capture and matching system capable of acquiring irises up to 12m away in an unconstrained manner. His recent work includes ranking first in Vision for Intelligent Vehicles and Applications competition for hand detection on steering wheels in natural challenging driving conditions. Some of his recent work can detect heavily occluded faces and objects in general under very challenging real-world conditions, developing low-shot object detection and recognition utilizing only a small number of images.

His early achievements include leading the R&D in CMU’s participation in NIST’s Open Face Recognition Grand Challenge 2005, ranking first in both Academia and Industry. Professor Savvides and his team also participated in NIST’s Iris Challenge Evaluation resulting in CMU to rank first in academia and second against iris commercial vendors. Professor Savvides was then chosen as one of four researchers to form the Office of the Director of National Intelligence’s first Center of Academic Excellence in Science and Technology in the area of biometrics and advanced algorithm development.

Savvides spun off a CMU startup called HawXeye with one of his former students where he served as CTO. As the CTO, he assembled a team and lead the research and productization of efficient, fast, low-form factor AI algorithms making current generation of home security cameras smarter where the AI algorithms developed have been deployed to over 3 million ADT home security cameras with a successful exit.

In the last 24 months, he served as the chief AI scientist of Bossa Nova Robotics, where he and his CMU research team, completely re-built from ground-up the AI algorithms for Bossa Nova robots for performing real-time inventory analysis and scaling the autonomous robot deployment of this inventory analysis AI from 20 stores to deploying 500 autonomous robots in 500 retail stores while completely removing any Human-in-the-Loop (HITL).

He served as the vice president of education for the IEEE Biometric Council in 2015-2016. He also served on the main steering committee and helped co-develop the IEEE Certified Biometrics Professional program.

He has authored and co-authored more than 240 journal and conference publications, including 22 book chapters and served as the area editor of the Springer's Encyclopedia of Biometrics. His IP portfolio includes over 40 filed patent applications with 15 issued patents. He is the recipient of seven Best Paper awards. His work in facial recognition was presented at the World Economic Forum in Davos, Switzerland in January 2018. His work has been featured in more than 100 news media articles. He is the recipient of CMU’s 2009 College of Engineering Outstanding Research Award, the Gold Award in the 2015 Edison Awards in Applied Technologies for his biometrics work, 2018 Global Pittsburgh Immigrant Entrepreneur Award in Technological Innovation, the 2020 Artificial Intelligence Excellence Award in “Theory of Mind,” the Gold Award in 2020 Edison Awards for Retail Innovations on Autonomous Data Capture and Analysis of On-Shelf Inventory, and the “2020 Outstanding Contributor to AI” award from the US Secretary of the Army Mr. Ryan McCarthy.

ECE/CyLab’s Marios Savvides has been named the 2022 Inventor of the Year by the Pittsburgh Intellectual Property Law Association (PIPLA).

The partnership will focus on early-stage research in object, body, and behavior recognition.

CyLab/ECE’s Marios Savvides was quoted in Popular Science on the caveats of facial recognition technology.

A New York Times article exploring the growing role of robots in retail discussed the work Bossa Nova and Carnegie Mellon researchers have conducted with Walmart to design a shelf-scanning robot that they hope both employees and customers will feel comfortable with.

A collaborative project in partnership with CMKL University aims to develop an artificial intelligence (AI) system to accurately screen bottles for reuse and recycling.

Walmart has expanded its use of CMU startup Bossa Nova’s shelf-stocking robots from 50 to 350 stores nationwide.

Savvides on AI and facial recognition

CyLab/ECE’s Marios Savvides spoke with CNET in an article about how AI has helped to drastically improve facial recognition. It is now being used more widely, at airports, in home security systems, and on cruises, with a 99.7 percent accuracy for the most cutting-edge systems. “We live in a time where AI can surpass the human brain’s capability,” he says.

Savvides on the future of airport security

CyLab’s Marios Savvides was interviewed by the Twin Cities Pioneer Press about the future of airport security and the role advancing technology will play. “With a facial-recognition system, there would be no need for a TSA agent to check your ID,” Savvides said. “The system captures an individual’s iris and full face as they walk by."

CyLab/ECE’s Marios Savvides was one of eight people recognized at GlobalPittsburgh’s 3rd Annual Immigrant Entrepreneur Celebration and Award Ceremony. Savvides, who hails from Cyprus, won the Technological Innovation category for his work as the founder and director of the CyLab Biometrics Center.

CyLab's Marios Savvides, Lujo Bauer, Jason Hong, Kathleen Carley, Martin Carlisle, and Carolina Zarate were featured in a New York Times piece about various ongoing research thrusts in CyLab to help combat cyberattacks. “More than 300 researchers and graduate students are working or studying at CyLab this year, making it among the largest cybersecurity training centers in the world,” the article says.