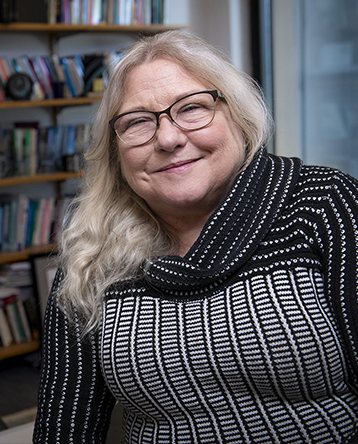 Kathleen Carley is a professor in the Engineering and Public Policy Department, Computer Science Department, and Social and Decision Sciences Department at Carnegie Mellon University. She is the director of the Center for Computational Analysis of Social and Organizational Systems (CASOS), a university wide interdisciplinary center that brings together network analysis, computer science and organization science (www.casos.ece.cmu.edu) and has an associated NSF funded training program for Ph.D. students. Carley's research combines cognitive science, social networks, and computer science to address complex social and organizational problems. Her specific research areas are dynamic network analysis, computational social and organization theory, adaptation and evolution, text mining, the impact of telecommunication technologies and policy on communication, information diffusion, and disease contagion and response within and among groups particularly in disaster or crisis situations.

Carley and her lab have developed infrastructure tools for analyzing large-scale dynamic networks and various multi-agent simulation systems. The infrastructure tools include ORA, a statistical toolkit for analyzing and visualizing multi-dimensional networks. ORA results are organized into reports that meet various needs such as the management report, the mental model report, and the intelligence report. Another tool is AutoMap, a text-mining system for extracting semantic networks from texts and then cross-classifying them using an organizational ontology into the underlying social, knowledge, resource, and task networks. Her simulation models meld multi-agent technology with network dynamics and empirical data. Three of the large-scale multi-agent network models she and the CASOS group have developed in the counter-terrorism area are: BioWar a city-scale dynamic-network agent-based model for understanding the spread of disease and illness due to natural epidemics, chemical spills, and weaponized biological attacks; DyNet a model of the change in covert networks, naturally and in response to attacks, under varying levels of information uncertainty; and RTE, a model for examining state failure and the escalation of conflict at the city, state, nation, and international as changes occur within and among red, blue, and green forces.

Carley is the director of the center for Computational Analysis of Social and Organizational Systems (CASOS) which has over 25 members, both students and research staff. She is the founding co-editor with Al Wallace of the journal Computational Organization Theory and has co-edited several books in the computational organizations and dynamic network area.

Bots, trolls, and how to safely navigate social media in 2020

CyLab’s Kathleen Carley was quoted on Yahoo about online disinformation and misinformation.

CyLab’s Kathleen Carley was quoted on Yahoo about the social media platform Parler that has faced backlash after it was tied to the insurrection at the US Capitol.

CyLab’s Kathleen Carley was quoted in The Christian Science Monitor on how to debunk misinformation online.

A recent study about misinformation on Twitter discussing COVID-19, co-authored by CyLab’s Kathleen Carley, was cited in an opinion article in The Hill.

CyLab’s Kathleen Carley was interviewed by NPR about a recent Carnegie Mellon study, which found that nearly half of the messages on Twitter about the COVID-19 pandemic were posted by bots.

CyLab’s Jason Hong and Kathleen Carley were quoted by WESA discussing the pros and cons of contact tracing apps to investigate cases of COVID-19.

In an op-ed published by The Fulcrum, CyLab’s Kathleen Carley argues that people must be resilient and use good judgment when faced with digital disinformation.

CyLab’s Kathleen Carley spoke with the Pittsburgh Post-Gazette about the recently formed Center for Informed Democracy and Social Cybersecurity, which aims to improve political literacy.

CyLab’s Kathleen Carley was quoted in PBS on coronavirus disinformation.